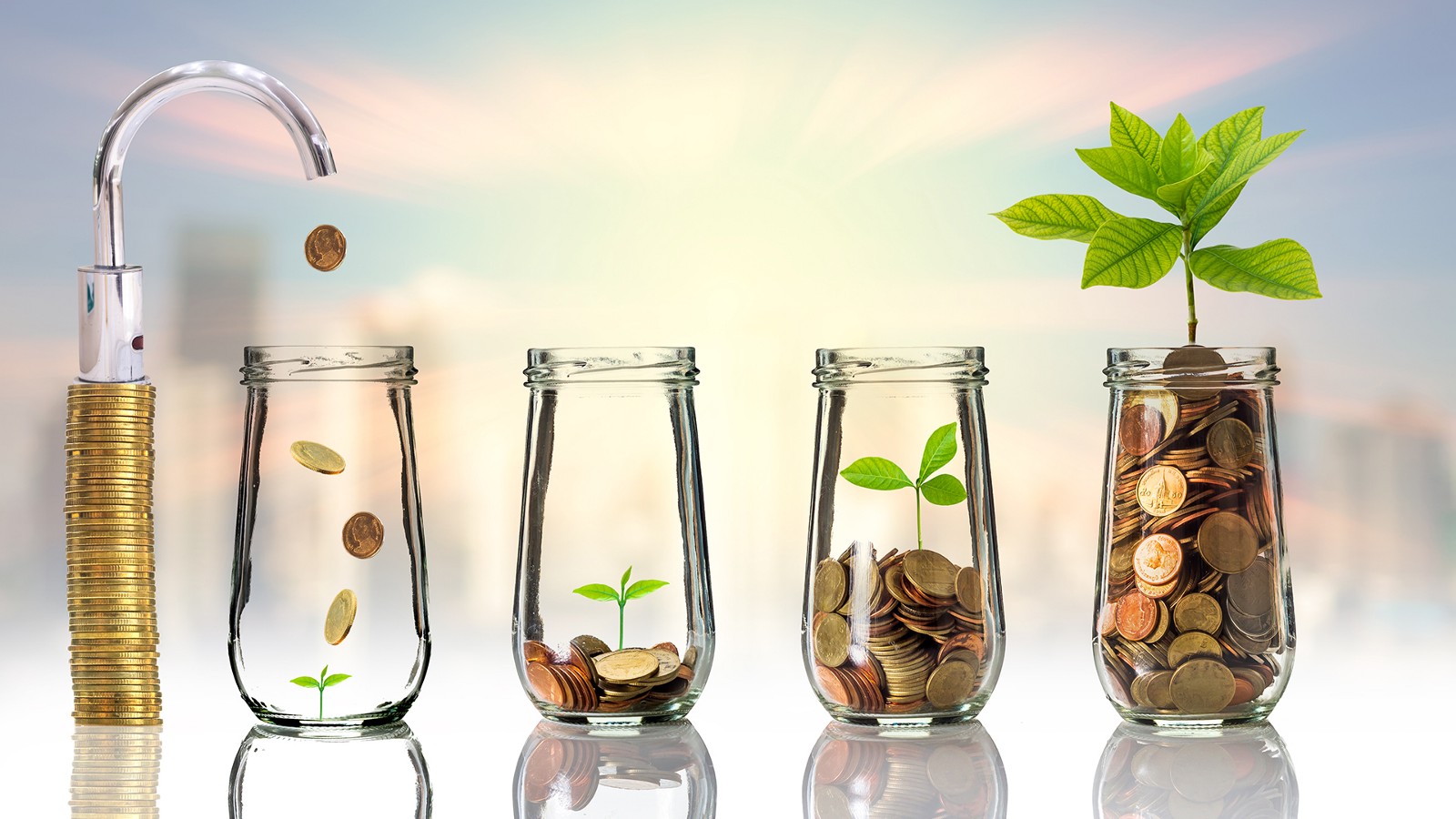 Investment interest has grown in the PEO industry. Whether it be through acquisitions via private equity firms or institutional investments into publicly traded PEOs, interest in the industry has grown. While the industry has been building for the last thirty to forty years, on a macro level, many investors have limited knowledge in the space. This is surprising for an industry whose total gross revenues are projected to surpass $176 billion for 2018.

When finance television programs discuss whether the market is “up or down today” they are generally referring to the Dow Jones Industrial Average. The Dow Jones is a price weighted average of thirty significant stocks traded on the market. Figure 1 provides the names and ticker symbols of the thirty stocks that currently comprise the Dow Jones.

As you will note from Figure 1, the Dow Jones is comprised of successful well-known investments. The Dow sets a solid bar in which to compare investments in the PEO industry. We are only using publicly traded PEOs in this basis of comparison as private company financials are not public knowledge. However, publicly traded PEOs represent over half of total industry revenues so the sample size is sufficient.

Please note, all investments are subject to certain risks and investment considerations with private PEOs should include appropriate due diligence.

Please note that the Annual PEO GAAP Revenues were pulled from the SEC filings of the above PEOs in the following formats: 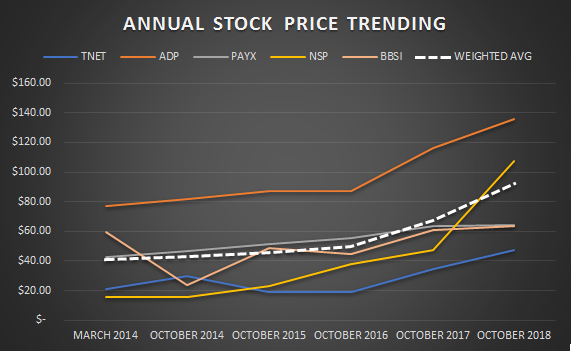 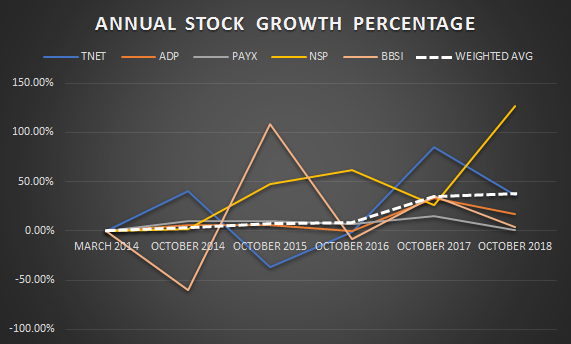 Are PEOs a Good Investment?

Over the last 4 ½ years, the weighted average of PEO stock price growth has increased by 124%. By comparison, the Dow Jones Industrial Average has increased in the same time frame by 52%.

When the United States experienced the Great Recession, the PEO industry only had one negative year over year revenue growth year of -3.9% in 2009. This one-year reduction wasn’t due to lack of new client growth but rather a reduction in same store sales due to existing clientele reducing workforce, hours, and/or wages during the great recession. Many PEOs continued to add new clients during the last economic downturn. Moreover, with an estimated PEO market penetration rate in the United States under 15%, the industry has more opportunity for growth and expansion.

With any investment choice, investors should weigh the risk factors prior to investing. Historically, the PEO industry has rebounded quickly from recessed economic conditions and continued to grow new business during a down economy. Also, the weighted average of the publicly traded PEOs have outpaced the Dow Jones Industrial Average in the last five years in growth percentages. However, every Publicly traded PEO hasn’t performed the same. Some have trended consistently while others have experienced some volatility within their stock price trending. There is not a composite PEO investment available. Therefore, investors should research each PEO individually to determine the appropriate investment(s) and timing of said investment(s).

Experts believe the PEO industry is in a growth stage. If this proves true, publicly traded PEOs may experience increased market-cap growth over the coming years.

Privately held PEOs were not represented in this article. The most notable private PEO is Oasis Outsourcing which is estimated to be one of the top 5 largest PEOs in the nation.

Rob Comeau is the featured Author of NetProftGrowth and CEO of Business Resource Center, Inc., a business consulting and M&A advisory firm to the PEO industry.