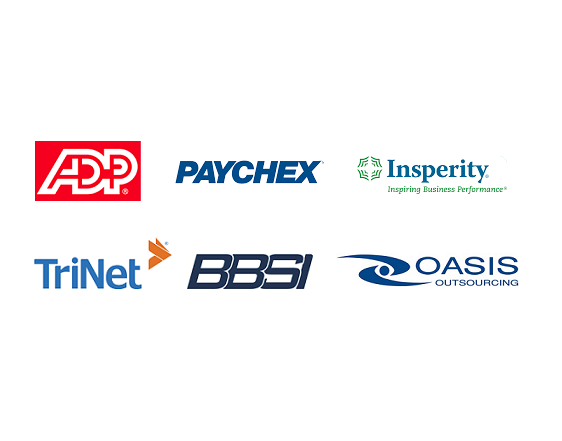 There are currently five large publicly traded PEOs; ADP TotalSource, Paychex, Insperity, TriNet, and BBSI. This article will provide an overview of stock trending, market caps, P/E Ratio, stock performance versus major market indexes, Glassdoor reviews, three year revenue trending, and commentary. The combination of this information is what is used to provide the overview of the publicly traded PEOs in the market.

Below is an outline of each PEO’s market cap, P/E ratio, and trading performance for the trailing twelve months (TTM). The market cap is the current stock price multiplied by its outstanding shares. As a point of reference regarding P/E ratios: Generally a high P/E ratio means that investors are anticipating higher growth in the future. The average market P/E ratio is 20-25 times earnings. The P/E ratio can use estimated earnings to get the forward looking P/E ratio. Companies that are losing money do not have a P/E ratio. – Investopedia

ADP TotalSource is the largest among publicly traded PEOs while Insperity has the highest P/E ratio. Insperity is trading at 14.65% higher above its TTM midpoint which leads the peer group. Current trading values were pulled on 1/18/19.

Note: Paychex numbers do not reflect the acquisition of Oasis Outsourcing, Inc. Their numbers will likely shift once the financials for Oasis are included in their next filing.

The stocks for the majority of publicly traded PEOs have trended in a positive direction over the TTM.

Paychex is leading the way with the highest rankings in all three categories.

As a point of reference, considering Paychex just recently acquired the formerly largest privately held PEO Oasis Outsourcing, the rankings for Oasis are listed below.

The majority of publicly traded PEOs have outperformed indexes and most are trading above the midpoint of their 52 week high/low. The majority of PEOs have a positive composite rating based on feedback from current/former employees on Glassdoor.

The stock market has been a bouncing ball lately with dips and gains. However, as history shows, a bull market will not last forever. When the market does correct, PEOs historically have been resilient to economic downshifts as noted on our PEO Industry Statistics articles.  The majority of P/E ratios suggest that the investment community expects continued growth in the segment. Publicly traded PEOs have experienced between 23.17% to 28.19% for revenue growth between 2015 to 2017.

While the PEO industry is fragmented, revenue distribution is more consolidated. The midpoint of revenue growth between publicly traded PEOs is just over 25% from 2015 to 2017 numbers. This equates to an annual average growth of roughly 12.5%. Even with a potential economic downshift, where same store sales will likely reduce, PEO industry revenues are expected to experience gains over the next five years due to new business added.

Likely Revenue Adjustment in 2019 due to Oasis Acquisition

At the time of the Paychex acquisition, it was reported that Oasis Outsourcing had 8,400 clients. It is likely that this will add between $1B and $1.5B to the Paychex PEO/HRS revenues illustrated in the Financial Performance section of this article, though this is purely speculation. We won’t know the true impact on revenue until they file a quarterly report with Oasis included in the financials to provide a base of reference in 2019.