A recent industry report was released on the PEO industry with updated statistics through 2017.  This article is a snapshot of the highlights contained within that report followed by author commentary.

According to the report, it states that the industry life cycle stage is growth with revenue volatility being medium. Regulation is medium within the industry and barriers to entry are also considered medium. Competition levels are considered high and industry globalization is low.[ii] 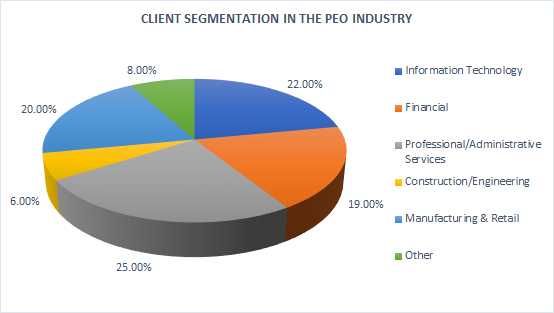 The industry report states that the PEO market is currently dominated by three major players; ADP Totalsource, TriNet and Insperity. The report estimates gross revenue market share percentages of 23.1%, 18.7% and 10.1% respectively [v] as noted in figure 4 and figure 5.

According to IBISWorld, 52% of the industry’s gross revenue is controlled by the top 3 players; ADP Totalsource, TriNet and Insperity with the remaining 48% controlled by the rest of the field. The PEO industry is more top heavy than the report illustrates. Once you factor in Oasis, Paychex, CoAdvantage and BBSI the numbers are more heavily skewed toward the largest handful of PEOs controlling a large majority of industry revenues. This is a trend that is likely to continue through acquisitions and consolidation by strategic and private equity buyers.

IBISWorld projects the industry to grow at an annualized rate of 0.7% from 2018 through 2023.  I believe the industry will grow at a quicker pace. There is a likelihood of an economic downshift and the potential for significant inflation over the next 5 years. That being said, based on historic data, the PEO industry only experienced one negative year over year growth year during the great recession. I estimate the industry will grow from 2018 through 2023 at a range of 1.5% to 3.0% annually.

Some macro external drivers that could affect the PEO industry are major regulatory shifts, major stock market correction, economic downshifts, and inflation. The PEO industry has historically rebounded quickly from a sluggish economy and the industry benefits from major regulatory changes, especially those that affect SMBs. However, the PEO industry has not lived through a state of serious inflation. The last major inflation the United States experienced was in the Carter and Reagan era. It will be interesting to see how the industry responds when this eventuality occurs.