A recent industry report was released on the PEO industry with updated statistics through 2016.  This article is a snapshot of the highlights contained within that report followed by author commentary.

According to the report, it states that the industry life cycle stage is growth with revenue volatility being medium. Regulation is medium within the industry and barriers to entry are also considered medium. Competition levels are considered high and industry globalization is low. [2] 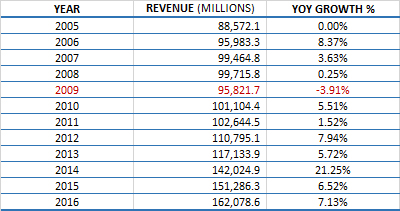 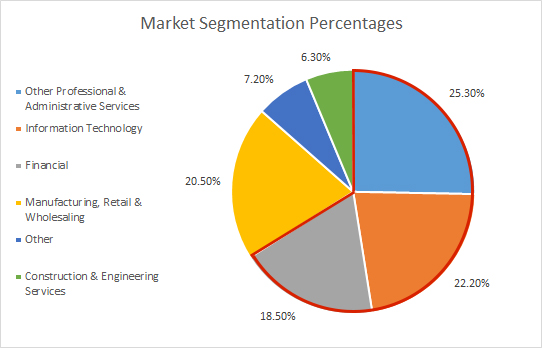 The industry report states that the PEO market is currently dominated by three major players; ADP Totalsource, TriNet and Insperity which which it projects for 2017 will have gross revenue market share percentages of 20.8%, 20.2% and 11.3% respectively as noted in figure 4.  [5] 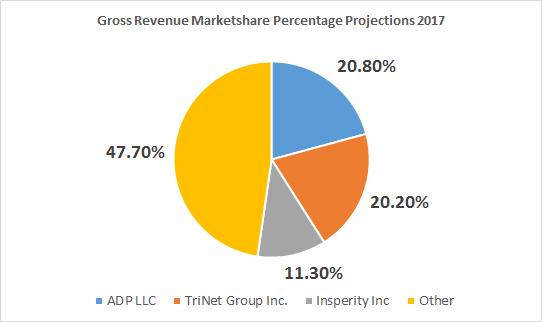 Market Leaders: The IBISWorld report market share is based on gross revenue projections for 2017 which shows ADP and TriNet as much larger than Insperity.  However, on a net revenue basis (gross revenue less WSE payroll) as in accordance with GAAP, you’ll note that the three are much more similar in size.  These three having more similar net revenues and largely different gross revenues is likely achieved via Insperity commanding higher pricing than the others.

Major Players: According to IBISWorld, over half the market’s gross revenue is controlled by the top 3 players; ADP Totalsource, TriNet and Insperity with the remaining 47.7% controlled by the rest of the field.

I believe this metric is more drastic than illustrated in the IBISWorld report. Oasis (private) is a massive player in the PEO space and one of the market leaders along with ADP, TriNet and Insperity.  Other PEOs of size that weren’t mentioned in their report were BBSI (public), CoAdvantage (private), PEMCO (private), Paychex (public) and G&A Partners (private) to name a few.  These additional PEOs coupled with a few others would likely further skew the market share imbalance toward larger players controlling the vast majority of the market in 2017.

Industry Growth Projections: IBISWorld projects the industry to grow at an annualized rate of 2.6% from 2017 through 2022.  I believe, barring any major economic downshifts over the next five years, that the industry will grow at a slightly higher clip.

The basis for my position is outlined below:

Segmentation: IBISWorld believes that more growth will occur in the white collar client segment than the blue collar segment.  They attribute this to manufacturing being outsourced abroad. Larger PEOs have seemed to increase their focus on white collar business in recent years.  Historically, the three main components of a white collar PEO offering are HR, Tech and Health Benefits. If this trend continues, the reform of healthcare from the US Government could further affect the industry revenue depending on the regulatory impact and compliance requirements for small and medium sized businesses (SMBs).

Author: Rob Comeau is the CEO of Business Resource Center, Inc., a management consulting and M&A advisory firm to the PEO industry.

Move the Middle: A Lesson in Sales Leadership